TL;DR - if you aren't insanely particular about audio reproduction, and are instead more interested in not breaking your back or your baggage allowance, get the Roar 2. 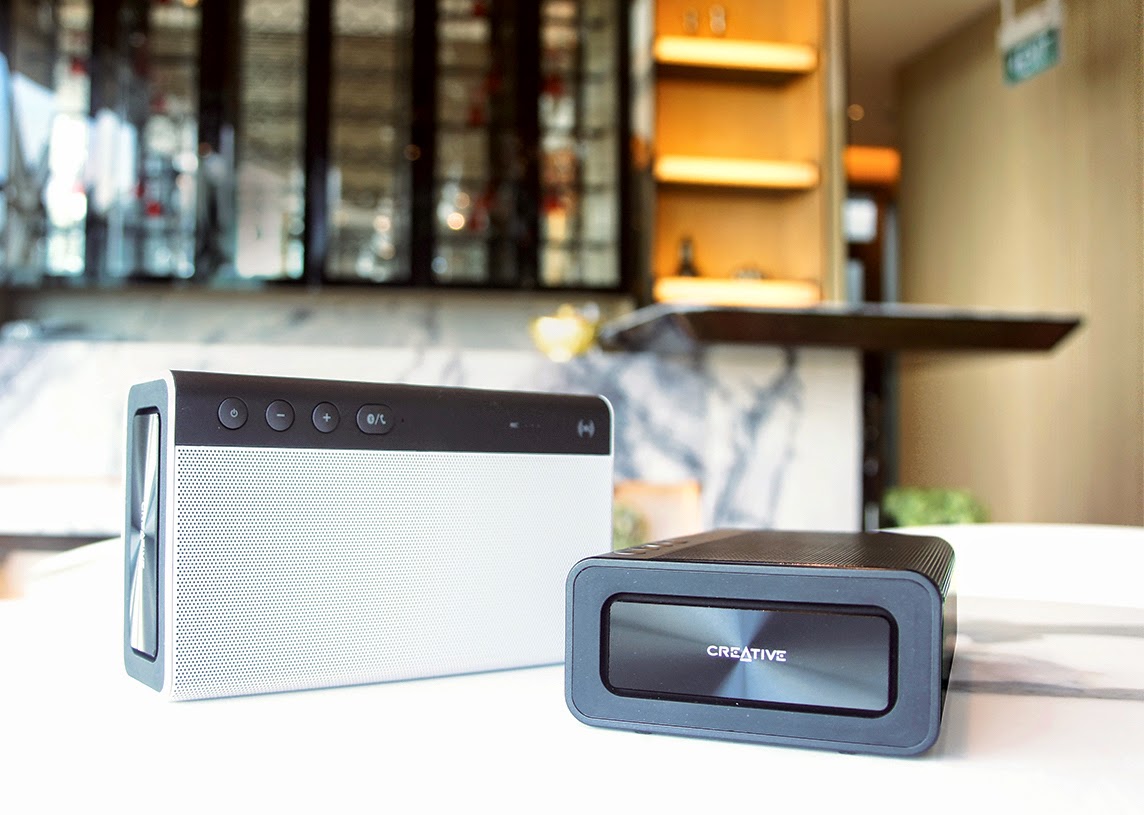 A year ago I went on what David Attenborough might have described as a frenzy, technolusting after a product I only had theoretical knowledge about, eagerly awaiting the day I would be able to queue up (short one, because obviously I was one of the first), fling dolla dolla bills at the poor staff behind the counter, and dance out of the convention hall with my new-found (still theoretical) love into strawberry fields forever.

I did so, minus the swag bits (because civilization, guys), and went home with the Creative Sound Blaster Roar. And for once, the hype did not disappoint. It performed as it said it would, and astounded as it promised it would.

Courtesy of the awesomely hospitable Creative team, I got a chance to learn more about the Roar 2, and take a review unit home for further testing.

"20% smaller, 10% lighter, 100% sexier" is the tagline they've come up for the Roar 2 - I have my subjective reservations about the 100% sexier bit, but I still think the phrase makes brilliant sense from a marketing perspective. Creative basically said that they looked to shave as much external material and components without changing any of the core internal components that have contributed to the original device's jaw-dropping audio quality. For those considering the Roar for the first time, those internals are a bi-amplifier system separately driving two higher-range drivers, and one woofer with two passive bass radiators on either side that amplify and throw lower frequencies outwards, along with aptX and AAC Bluetooth audio codecs to ensure the best possible wireless sound.

Before I go on, Creative has made it clear, both to me and within their press and marketing materials, that the Roar 2 is not an upgrade, or a Gen-2 product, it is an alternative choice for customers in line with feedback asking for something even more compact, and lighter. Keep that in mind as you read through the rest of this review and assess which is better for you, the Roar 2 or the Roar Classic.

Shaving as much of the chassis off meant sizing down with as little compromise to the product's now famous audio quality. I suppose it is natural that the first thing to go were the metal grills protecting the bass radiators on either side. This along with the reduced overall size does mean that there is less room within the speaker for the bass to resonate, but more on how that affects overall sound later. Creative assures me that the now exposed radiators have been suitably reinforced, and indeed the metal plates are made of beautifully machined aluminum surrounded by a springy flexibie rubber that feels it can take some accidental impact. If it is your thing, the radiators now visibly pulsate to tangibly mesmerize you with almost-holographic Creative logos. Like so:


Other external enhancements: I love that the front buttons are now tactile bumps, instead of being flush with the surface. So much easier for you to deal with your speaker without looking at it, because there should be plenty more important things to do in a party, or indeed, for visually impaired people to use the device. The MicroSD card playback and voice record buttons sets at the back remain the same, but they have removed the alarm button out (I love bells and whistles but that was a vuvuzela right there if you know what I mean) and moved the Roar button to the back, which now functions to cycle between regular, Tera Bass and Roar audio modes. There is also now a switch between USB Audio and Mass Storage modes, to cut out the problem of cranky computers not recognizing your Roar's MicroSD as a storage device. This switch makes it clear what you intend to do - use it as audio output or manage your MicroSD card. Ports remain the same - MicroSD slot, MicroUSB, USB out for charging your device (the Roar uses a 6000mAh Li-ion battery), Aux In and DC In.

If you've read this far, you're interested in the crux of the matter: just how does a sized down Roar perform aurally?

Maintaining the same innards as its predecessor means that the Roar 2 essentially can handle just about any genre of music you throw at it - classical, opera (not the same), hard rock, jazz, musicals, live recordings, funk, classic rock, electronic, dance. Those are just what I have in my library, and if tests are anything to go by, the list goes on. Nuances that you would think to forgo in a portable speaker surprise you by showing up anyway - the squeak of fretting on guitars, shadow beats on cymbals and drums, breathy harmonics on a flute. These are the marks of solidly crafted mid-high frequency drivers.

The bass continues to be a pleasure to indulge in, and now have throbbing aluminum plates to boot. The massive bass drops in Jamiroquai's Tallulah and Giorgio Moroder's 74 Is the New 24 did prove to be a little beyond the speaker's capabilities, but for one with dimensions similar to that of a paperback novel, the fact that it managed to reproduce half of those drops already speaks volumes (heheh volumes, geddit).


A key difference between the Roar Classic, as they are calling it, and the Roar 2, is that the two mid-high speakers now accompany the low-mid woofer in firing upwards, as opposed to the front-firing configuration in the Roar Classic. 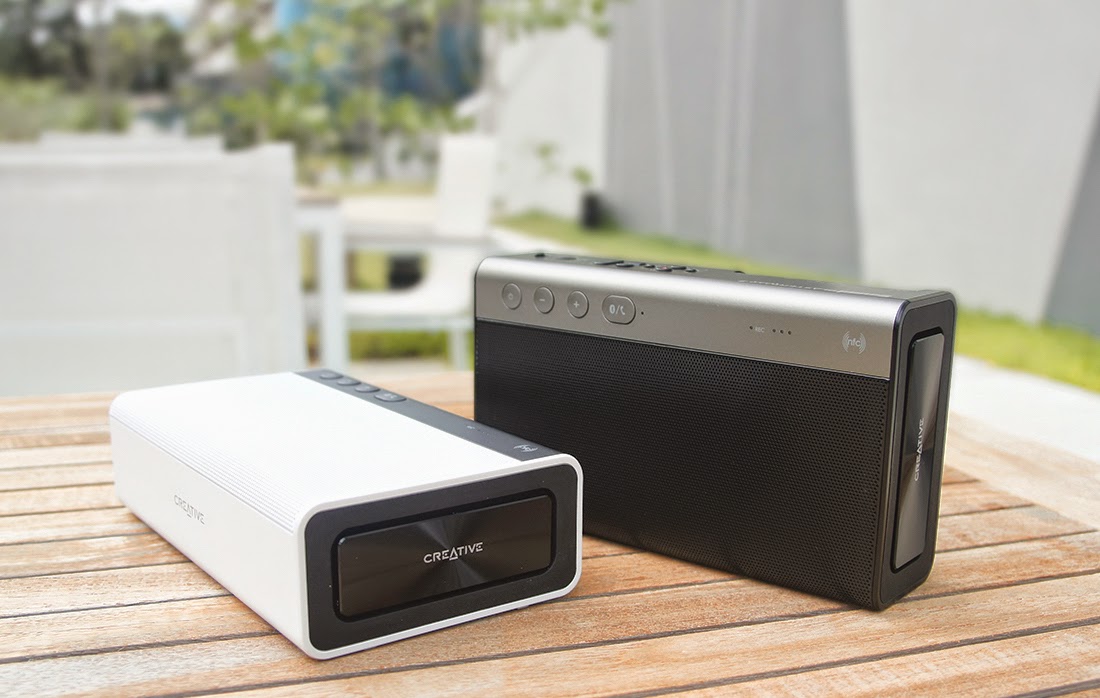 This crucial change makes for several things: with the Roar 2's configuration, you are now able to either lie the speaker down for coffee table-type use, or sit up for more directional, party-type use. This, Creative says, is in line with user feedback which requested this flexibility. When told this I nodded with a smile, guiltily wondering how many times I made my Roar Classic sit up, completely forgetting that the two more important speakers were firing right into solid wood or stone. Honestly, it still sounded good, which is why I never had enough cause to doubt I was using it wrongly, if I even did so in the first place.

The down side to this that, from a strictly audio perspective, you do not get the best-of-both-worlds configuration that the Roar Classic offers, firing mid/high frequencies forward while throwing low/mid frequencies upwards and sideways, where it would have more space to resonate. But hey, if you wanted something that can produce great audio at both low and high volumes, with audible bass, wherever the hell it fires as long as you hear it, then get the Roar 2, because it will be less of a strain on your luggage space, or your shoulder if you are hand-carrying it. If you know that you will be using this speaker for evening tunes before bed as much as you will be using them on travel, then get the Roar Classic, because you will most likely appreciate the more carefully projected soundstage the Classic offers.

If you already have the Roar Classic, I wouldn't advise purchasing the Roar 2, unless you have a family member whom you can pass the Classic to - remember, it is not an upgrade, it is an alternative choice for customers.

The original Creative Sound Blaster Roar is available at the IT Show 2015 at Suntec Convention Center Hall 601 for S$198, and the Creative Sound Blaster Roar 2 available in limited quantities for S$249 in black or white, bundled with a really sexy neoprene carrying case. If you are going to pick either products up there, ask for the discount vouchers.

Great blog post!!! its worth to read this. I found out some more great stuff to read.
Portable bluetooth speakers

It’s refreshing to read a good quality article for a change. You’ve made many interesting points and I agree. This has made me think and for that I thank you.
Email database uae

Does volume decrease along with battery life?

Really? Nothing was done to rectify this problem? Its really annoying in the first roar. Volume keeps decreasing on its own.