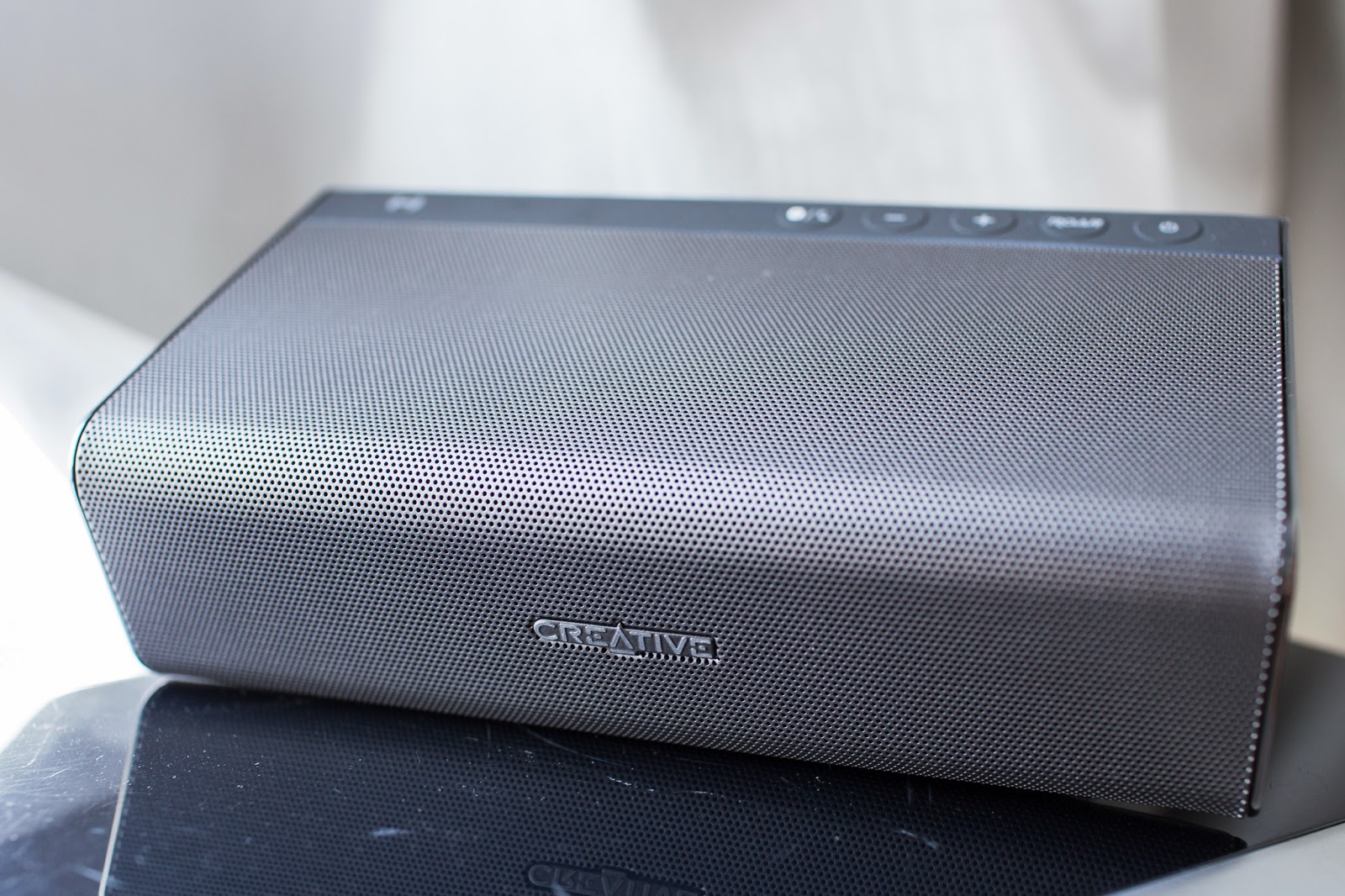 Given that audio reproduction revolves chiefly around the induced movement of air, when audio products come in small sizes, they have a great tendency to leave much to be desired of its quality. Smaller drivers are only able to move so much air, and that usually makes for a weak, unbalanced or worse, forced output. From time to time, however, certain products find the means to go against the odds of physics to create highly admirable sound within a compact package. I consider myself immensely fortunate to be able to own a number of such products, and the latest addition to the family is the freshly released Creative Sound Blaster Roar. 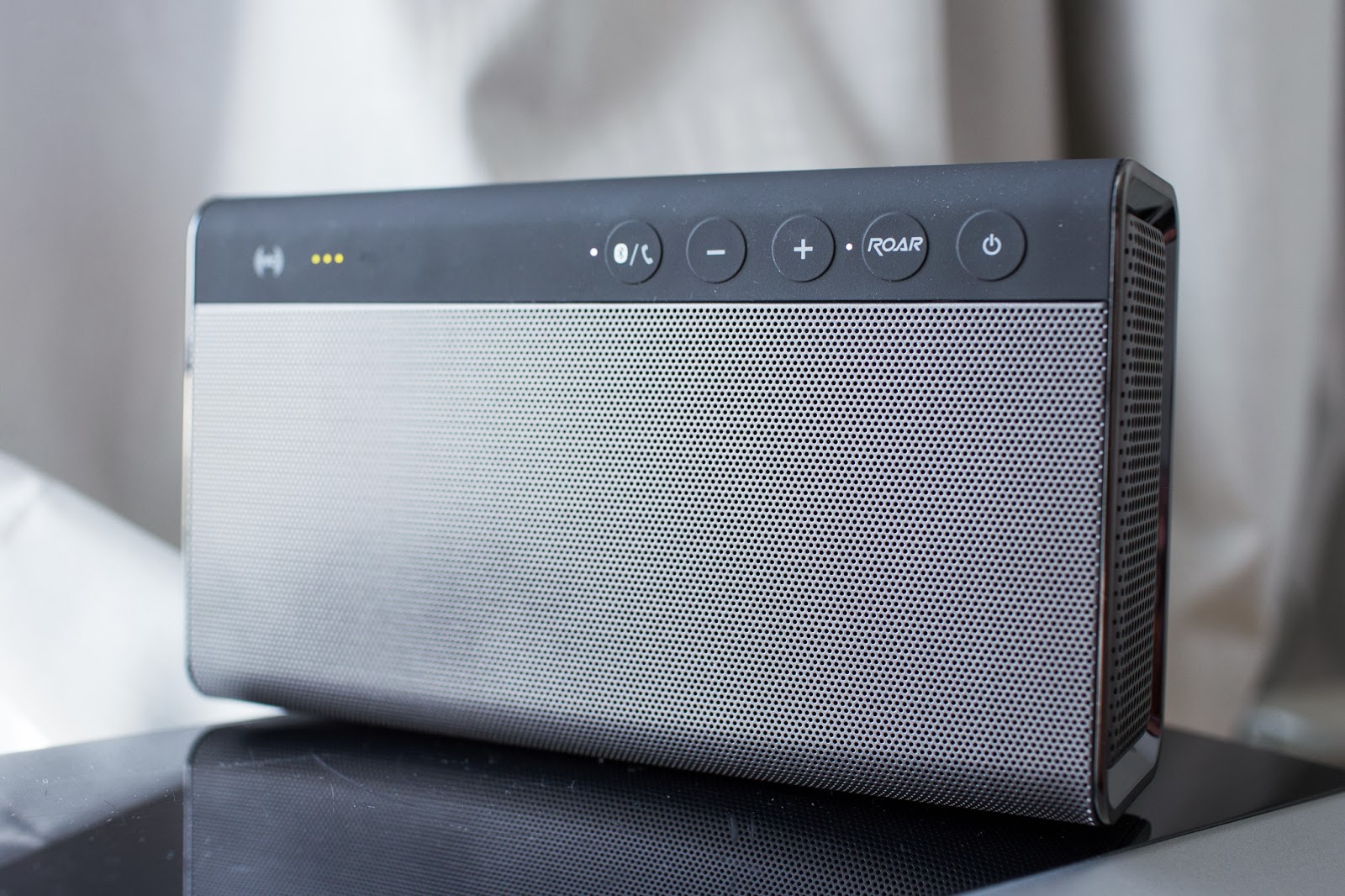 When this portable Bluetooth speaker was first announced at CES 2014, I noticed news of it but never bothered to read any article that featured it. All of that came back to me when I received Creative's eDM on the then upcoming IT Show, announcing they would be debuting their latest star product, one that has won international recognition, with a 41% introductory discount. A quick search revealed a fresh article on Hardware Zone reporting on their closed-door preview of the device, which I have perused extensively in the lead-up to my purchase. The writers at Hardware Zone take after my heart in their standards for aural excellence, so if they've waxed lyrical about it, that's theoretical reason enough for me to go for it. Check the article out for more technical and feature-centric points on the product.

By the way, having seen the mad sell-outs on the first two days of the IT Show, I went down at noon when the show opened on Saturday and literally brisk-walked to the Creative booth to listen to the device for a grand 15 seconds before zipping to the payment counter to pick up a unit. I thought that kiasuism had gotten the best of me, and was just starting to feel foolish when I found out later that units for the day sold out at 2pm.

Ok, review. With the product lying down, Creative logo facing towards you, there are two mid/high speakers projecting stereo sound towards you, bass projecting upwards because obviously that's where the least obstruction of air should be, and radiating panels on either side to push the sound outwards evenly. This is something that's really apparent with the device - it's of course easy to tell where the sound is coming from or projecting towards, but wherever you place the Roar, you get a great sense that its sound reaches outwards to fill the space, which I think is well beyond the expectations of many smaller sounds systems, to say nothing of portable wireless speakers. 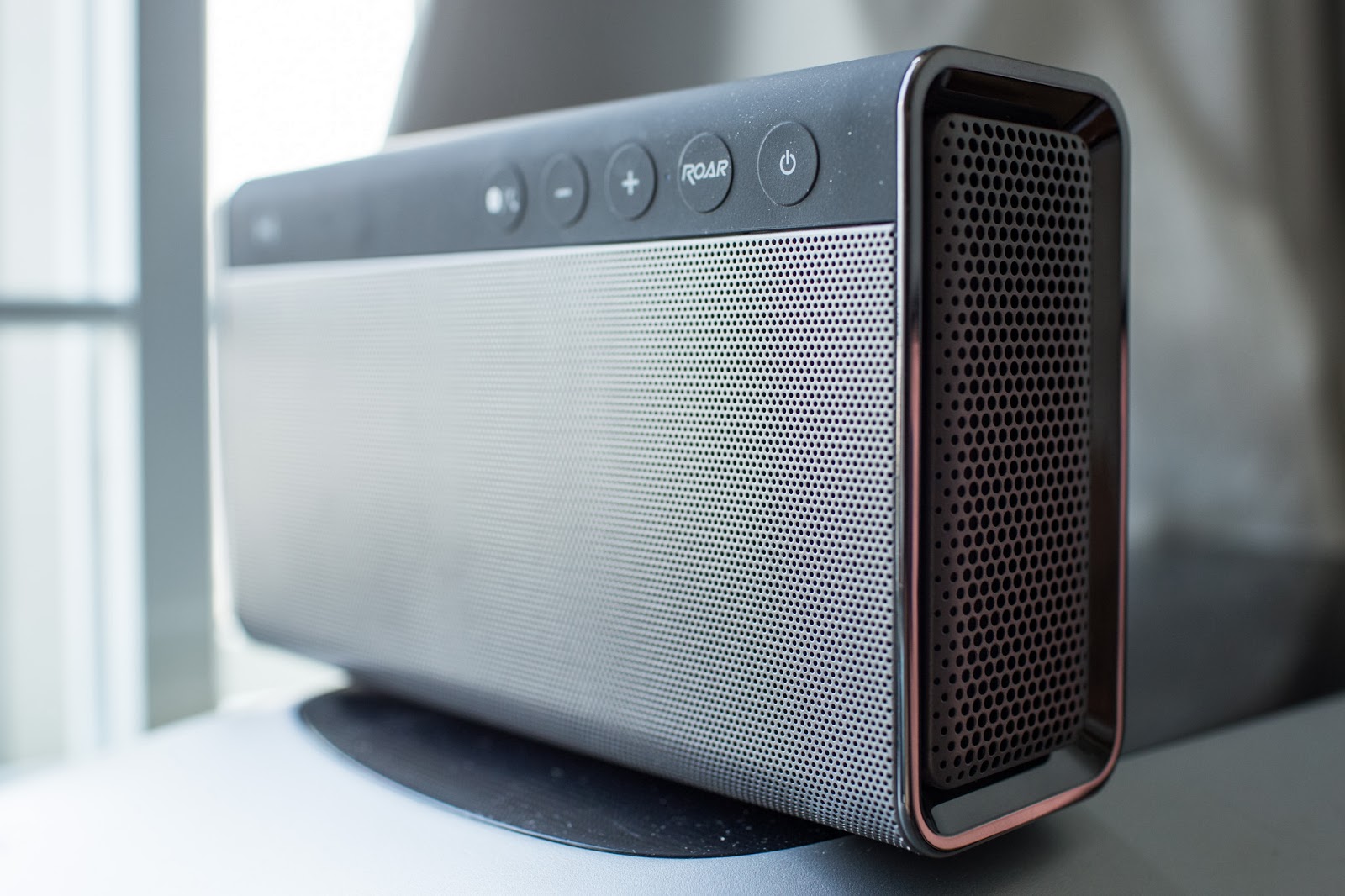 Will you get tight and defined 10Hz bass beats? No. Is the bass tangible? Heck yes, and I think it's something that will continue to impress me for a long while. As for the main pair of speakers, it's got the good ol' signature warmth of Creative speakers, without getting muddy and in fact being impressively crisp, that I so love. I have yet to hear it crackle, and I don't want to make that happen because 1) I would like to retain my precious hearing please and 2) I don't want the police paying me a visit.

Having put everything together in such a compact case, I think the choice for hard metal grills are highly sensible, if not pure genius (which sensibility seems to be as rare as these days). Metal grills will provide due protection to the many speakers and driving elements inside, while ensuring that air is able to move freely.

Here's the thing about the Roar button though. It was made to amplify, enhance and spatially widen the sound so that it still cuts through in larger gatherings and spaces, and that will of course contribute to an accelerated loss in battery life. But there is a marked difference in quality between Roar and normal modes, so great that I would much rather turn the Roar on and reduce the volume, rather than go with the normal mode at a higher volume. Even better audio quality, enhanced for longer reach, which can be enjoyed at lower volume - why would you not take that? I certainly would. Every time. In other words, I would have been happy without an option to un-Roar the speaker.

Quick note: it is mentioned in the manual that plugging the power supply in would further enhance the quality of the Roar mode, and that it is recommended to keep the power supply plugged and running while on Roar mode. While I would gladly endorse the latter statement, I noticed no significant difference between battery-powered Roar, and DC-powered Roar.

Another difference I was pleased to find a lack of is the audio quality between direct playback and Bluetooth playback. I've loaded 320kbps MP3s as well as WAV files into the card, and playing the same music from my phone through Bluetooth, I found only the same sparkling audio quality from it. Be warned: Your mileage may vary on this point. 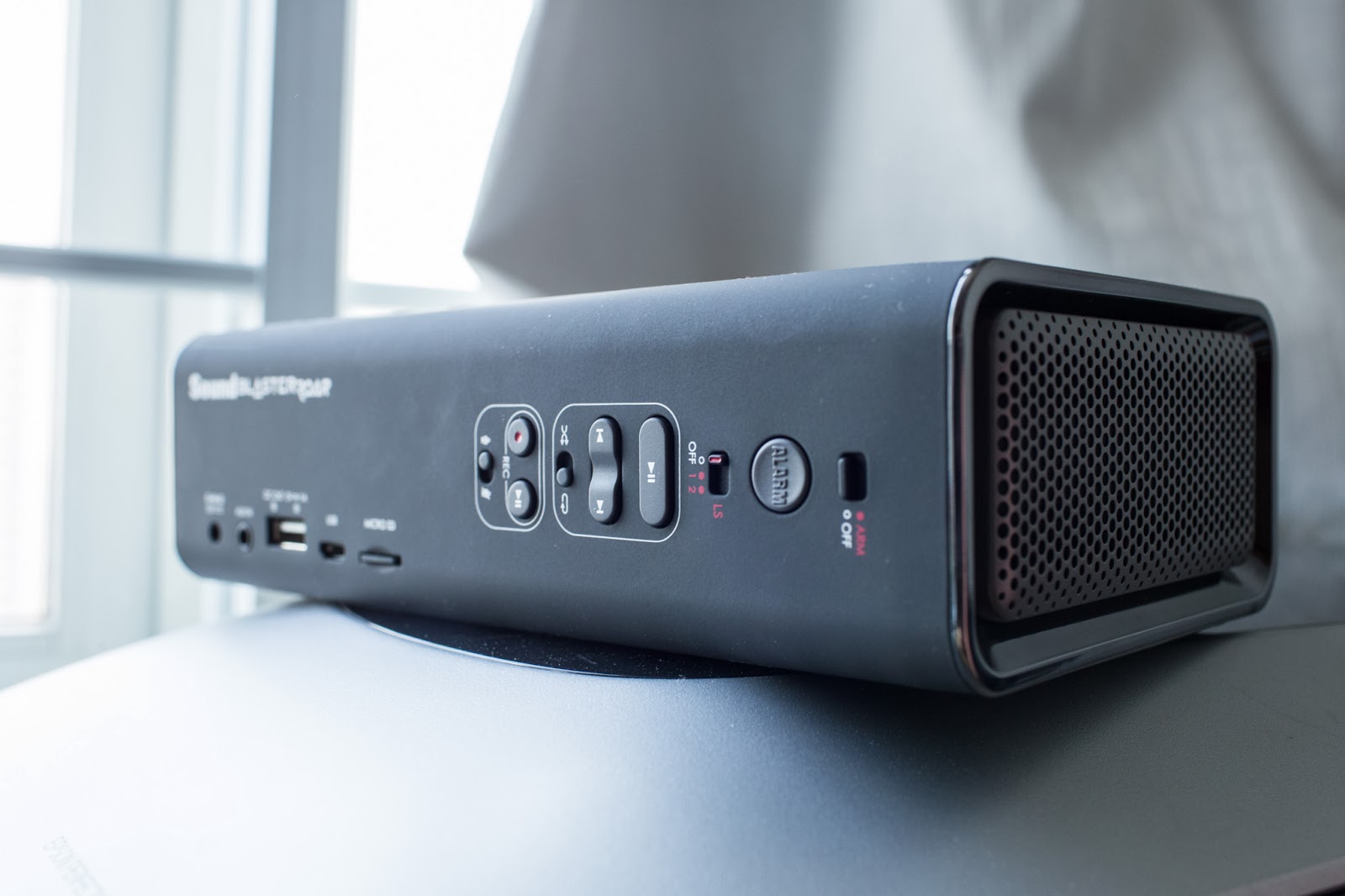 The sheer multitude of features were also a huge factor in influencing my purchase. Offering not only playback from a MicroSD card but read/write via USB, audio output via USB in which your sound experience can be further tweaked with downloadable software, the ability to answer calls and record either currently streaming music or voice via in-built microphone into the card, and good Lord why has no one thought of this, a USB DC-Out to supply extra juice to your mobile device streaming music to the speaker, this portable speaker has all you need and more, with fantastic audio quality to top it all off.

While I definitely do find the Alarm mode useful (calling-for-attention alarm, not wake-up-at-7 alarm) I don't think I'll be using it anytime soon. Ditto for Life-Saver modes, which play loud noises randomly to keep you awake, although I'm way more appreciative of this feature, since it can help with midnight oil burners who don't want to wake up the next day to find that their report consists of 6 words and a pool of saliva on the table, and more importantly long drives in other countries.

An unfortunate problem of the speaker, even though it technically has stereo output, is the lack of effective separation between Left and Right audio channels. This is due to the fact that the speakers are so close to each other, but I gather you don't really need such details when you are groovin' away at the party. This will be more of a pain point to the discerning audiophiles who just want to bring their music along with them to enjoy. I would have thought that it would be a simple matter of angling the speakers away from each other to pull the audio channels apart, but perhaps that would be detrimental to the effective projection of the sound, which is obviously key in this product and while I well won't argue with.

The speaker is also rather hefty, at more than 1kg. It's kinda like the Alienware of the portable speaker world - while it can definitely be moved around and transported quite freely, you will find the bulk and weight to be the cause of slight annoyances if you're hand-carrying the speaker, even with the carrying case that they're currently giving away free with purchases of the product.

The Recommended Retail Price of the Sound Blaster Roar is S$338. At time of writing, you may still pre-order your unit at S$199, to be delivered from 8 April 2014 onwards, though this extended IT Show promotion will end 10 March 2014. As echoed by many others, it offers tremendous value for money even at its standard price, and at $199 you are getting practically glorious quality and features for pretty much a third of the market price for such products. If you are in the market for a portable audio solution of any kind, you need to have this product in your consideration list.

It good to see a local company produce a product that can reach many house hold as well as the parks in Singapore that people exercise with quality sound.

The price is actually extended at their website. You can still catch up :-)

Great review buddy! I eagerly await for my set to arrive at my doorstep. Wish it could arrive this month, but I'm willing to wait since I bought it online...

It still sells for S$ 199 on-line. Waiting time is about 6 weeks though.

Energi Sliding Power Case for iPhone 5 Blue with slide on battery is a must have for all Geeks who have an iPhone, and with slim battery technology we only add 9mm to the thickness of your iPhone.

The technical review of this Creative bluetooth speaker depicts that it has been made keeping in view the users need.Let me introduce to you the brands like Bose, Sonos and HEOS by Denon also have come up with their wireless speakers but with a difference. I came across this resource which explains which one is better bluetooth or wifi. http://high-end-audio-speakers.blogspot.com/2014/10/do-you-want-to-use-bluetooth-or-wifi.html

When this portable Bluetooth speaker was first announced at CES 2014, I noticed ... iwaterspeakers.blogspot.com

Excellent post man!
I strongly agree with your point that the Strong Relationships with your customer is the key,and Use the Language Your Customers Use. These two points are the main key points which we have to focus in B2B Marketing.
cheap bluetooth

A 10000mAh power bank is a portable charger for your devices and it is an absolute must-have product if you travel a lot. You need to be able to charge your devices if you want to fully utilize them on a single trip. Smart phones, tablets, etc., all require power after some time and a power outlet is usually not available everywhere you go.
---------------------
10000mAh Power Bank

I got some great tips form this article,.
it's really good,.
bluetooth speakers

If I had to recommend one Bluetooth Speakers to most people shopping on a budget today, I’d pick the JBL Flip 3. It’s the most well-rounded portable speaker I’ve tested for less than $100, and, considering that price, it doesn’t have any glaring, deal-breaking weaknesses.

Bluetooth Speaker is connected via Desktop?

so nice information thanks to shRE best cacr speakers

Way cool! Some extremely valid points! I appreciate you penning this post plus the rest of the site is very good.
http://editorsviews.com/best-scanners-2018/


It’s hard to come by experienced people about this subject, but you seem like you know what you’re talking about! Thanks
http://editorsviews.com/how-to-lose-weight-in-a-week/

I’m impressed, I must say. Seldom do I come across a blog that’s both educative and interesting, and without a doubt, you have hit the nail on the head. The problem is an issue that not enough folks are speaking intelligently about. Now i'm very happy I stumbled across this during my hunt for something regarding this.
http://editorsviews.com/category/health-and-beauty/

Thanks for sharing this blog. Doodeo is providing best and motivational speaker to their customers.